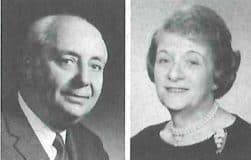 It was a story unlike most. George’s family migrated from Austria, and Rose was from Russia. George literally fell in love with the girl next door when the two families became neighbors in Toledo, Ohio. George and Rose were married in 1920 and started a family soon after.

Ultimately, George and Rose settled into the heart of the Wabash Valley – Terre Haute, IN – and opened Hillman Jewelers with family friend, Chris Hillman, in 1935. Soon after the grand opening, Rose joined her husband while Mr. Hillman left the business. In 1963, the Felstein family encountered a disastrous fire that destroyed the business and others around it. With hard work and determination, the Felsteins rebuilt their beloved business.

Knowing the importance of charitable giving, George and Rose created the Hillman Jewelers-George Felstein Scholarship Fund at Rose-Hulman Institute of Technology. The couple wanted to give back to the community that gave them their success.