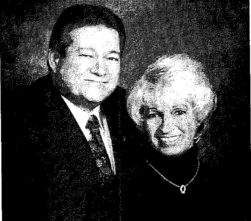 Dan and Jane Robbins both had a love for music. While Jane had always been involved with music from a young age, they both became more involved and enthusiastic when Jane’s daughter joined the Drill Team and Winter Guard in 1985 at Northview High School. Dan and Jane attended all the concerts and contests, were involved in the pit crew, drove the maintenance truck, and even acted out a play so the band could have a better understanding of what they would be performing. Dan and Jane had a love so big for their family, their community and music. Whoever was around the pair could see that whatever they were doing, they put their heart into it. Dan passed away in 2006, which prompted the family to set up the Dan and Jane Robbins Northview Marching Knights Scholarship Fund. Although he is gone, he would love knowing that residents of the community are still being assisted by his wife and family.