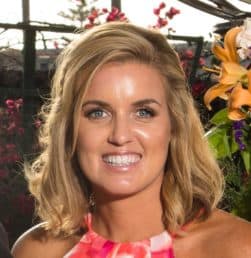 Catherine Elizabeth Grimes was an inspiration to every person that was fortunate enough to know her, including family, friends, classmates, teammates, clients and others. Regardless of where they came from or how they came to know her, Cathy had a way of making everyone in her life feel like they were her best friend.

A 1997 graduate of Terre Haute North Vigo High School, she motivated classmates and teammates with her tireless work ethic, spending as many as 15 hours a day at school while balancing outstanding academics and overlapping practices for the swimming and diving, cheerleading, gymnastics, and track teams. Her hard work translated into consistent and outstanding athletic performances. Cathy was a two-time Indiana State finalist in diving, placing 3rd in her senior year. She won multiple sectional championships in the high jump and advanced to the state finals. As a junior, she was a member of the national runner-up North Patriot cheer team. When not competing with the cheer team, she cheered on the football, basketball, and other teams for all four years at North. In addition to her accomplishments in the classroom and athletic world, Cathy was very popular amongst classmates who selected her as the Junior Prom Queen and as a Senior Fall Homecoming attendant.

Her sense of adventure was illustrated when she took a year off from her Doctoral studies in Physical Therapy at Northwestern University to compete on the first season of ABC’s The Bachelor, now a long-running and popular reality dating show. Though she did not win, she made her mark, let her personality shine through, and earned a personal spotlight segment on the reunion show. Cathy returned to school, graduating in 2005 and moved to Scottsdale, Arizona where she worked as both an outpatient and traveling physical therapist.

Upon moving to Scottsdale, Cathy began to practice yoga, which provided a physical, spiritual, and social outlet that was very integral to her life. She enjoyed hiking in and around the Scottsdale area and beyond, particularly at Camelback Mountain near her home. She competed in many half-marathons, overnight Ragnar Relays, and other endurance events. In one case, she joined a Ragnar Relay team with only a week notice. Cathy developed a love for the mountains that was built upon early experiences as a precocious ski expert at Ski World and Paoli Peaks, and it took her to some of the biggest mountains in the world including Whistler, Vail and Telluride.

Cathy was a bright and shining light in the life of every person that she met. Her loving, generous and adventurous personality was, and continues to be, an inspiration to all that knew her. She passed away on Sunday, January 24, 2016 while vacationing in Jackson Hole, Wyoming.

Because of her love of swimming and sports, Cathy’s parents established the Catherine Elizabeth Grimes Memorial Fund to provide scholarships to outstanding female student athletes at Terre Haute North who embody the spirit and determination of Cathy. Through this fund, her parents were able to place a memorial bench in the diving well at the Wabash Valley Aquatics Center.