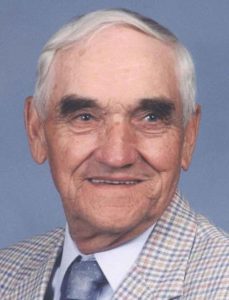 Albert Landes was born on July 2, 1918 to John and Alice Landes. He attended Van Buren High School where he graduated in 1936. After graduation, he received a job at the Adamson Lumber Company. A few years later, Albert would be sworn into the United States Army, from which he was later honorably discharged as a Sergeant due to a service related illness.

Albert was an avid member at the Northside Church of Christ in Terre Haute. He was also a booster for Northview High School and Clay City High School athletics.

In August of 1955, Albert married the love of his life, Virginia Adamson. Although he had many family members pass away during his lifetime, including his five sisters, three brothers, his parents, a stepson and his wife, Albert never let that stop him from making the most out of his life.

Albert created the Albert A. Landes Endowed Scholarship Fund with the Clay County Community Foundation, an affiliate of the Wabash Valley Community Foundation, to provide scholarships to two female student athletes from Clay County, Indiana. One student is to be a graduate of Clay City High School and the other a graduate of Northview High School.