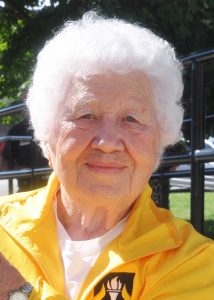 It has been said that Wilmadean was a legend, a pillar of the community in which she lived but the description Wilmadean wanted to be remembered by most was that she was a person who made a difference; and that she did.

Wilmadean grew up in Poland, Indiana, under her maiden name Spelbring. Her great grandparents were part of the German immigrant settlement that founded that town. From knowing her family’s history of immigrating to America and settling in Poland, securing a farm and bettering their lives, it made her cherish history and gave her a great desire to preserve stories of the past.

She attended the two-room Poland Elementary School and went on to graduate Brazil High School in 1943. She married Gilbert Schepper on June 30, 1945 and later married Garland Baker on June 28, 1997.

Wilmadean served in several different capacities during her lifetime from working in the personnel department at Indianapolis’ Eli Lilly’s to Clay County’s Jackson Street School secretary and as a librarian at Meridian Street School in Brazil. She later worked as a Title 1 aide and after 20 years with the Clay Community school system, retired in 1987. That was the beginning of her philanthropic years where she secured monies for preserving historic elements in Clay County. She did not take her retirement years easy by any means.

After noticing the disrepair of her hometown church, the 1869 established Poland Chapel, she and her friend Roxi Rentchler, went to work in the community raising money for repairs. The church was completely repaired and in 1990, through Wilmadean’s efforts, was named to the National Register of Historic Places.

Wilmadean was also instrumental in starting the Clay County Parks Association and arranging for a community effort to build a huge wooden playground in Forest Park, as well as securing over a million dollars for improvements to Clay County parks.

In her latter years Wilmadean held numerous leadership positions and was especially proud that she located and secured the iron eagle that was on the first Clay County Courthouse and arranged to have it returned to the county. She aided in the naming of U.S. 40 through Brazil as a State Scenic Byway, a National Road Scenic Byway and an All American Road.

While caring for her community and the preservation of its history, she did not neglect family of whom she adored. She had three children Don Schepper – Carbon IN; Judy Wallace (Glen) – Edwardsburg MI; Gretchen Rhoades (Doug) – West Terre Haute and six Grandchildren; Chris Schepper – Brazil, IN, Rich Larkin – Walkerton, IN, Jim Larkin (Kara) – Trafalgar, IN, Bob Larkin (Debbie) – North Liberty, IN, Christina McKeehan (Billy) – West Terre Haute, IN, Dustin Rhoades (Kailey) – West Terre Haute, IN and 10 great grandchildren. She is preceded in death by her parents, Fred and Dora Spelbring , her sister, Erma Stearley, and her husbands, Gilbert Schepper and Garland Baker.

Wilmadean lived on her own in Brazil until December of 2000 when she moved in with daughter, Judy Wallace, after experiencing health issues. In lieu of flowers, memorial contributions may be made to the Gilbert and Wilmadean Schepper Family Fund, c/o Clay County Community Foundation, 200 South 8th Street, Terre Haute, IN 47807 or by clicking here.

Wilmadean has been bestowed many awards throughout her years of service including Clay County Focus Awards, the Daniel Harris Award, the Volunteer of the Year Award from the YMCA, and the honor of being one of the torch bearers for the bicentennial. The one reward Wilmadean cherished the most, however, was the reward of knowing she made a difference to her family and her community.

She will be greatly missed by family and by all who knew her but the community she called home—and its history—lives on because she lived.