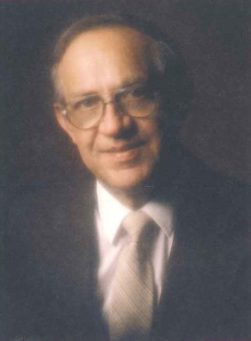 “Each year’s recipient of the Senator Herman J. Fanning Scholarship should be aware that Herman was a conscientious teacher and a respected public servant,” his wife, Joyce, said. “He was a good person and really liked people.”

Herman J. Fanning may be most widely known as a three-term Indiana Senator serving in the General Assembly from 1967 through 1978. To many who grew up in Vigo County, he is still remembered as a dedicated psychology and history teacher. To his wife and four children, he was the beloved husband and father who died much too young.

More than almost anything, his wife Joyce recalled, Herman Fanning loved to teach, especially psychology. A teacher for more than 30 years, the tall, slender Korean War Navy Veteran with a charismatic air, taught both psychology and history at Terre Haute South Vigo High School. “He had a unique teaching style,” Joyce said. “Students either loved him or hated him, but he made sure they learned.”

Remembering Herman as a public servant, Joyce recalled that his interest in politics came from his mother who was always involved in politics herself. “As a student at Indiana State University, Herman was active in the Young Democrats. So later in life it was just natural that he would run for office,” Joyce said. He went on to earn a M.A. at ISU and completed an additional year of graduate work.

Highly respected by his peers, Herman was named a Sagamore of the Wabash by the governor of Indiana and a Kentucky Colonel by the governor of that state. He was recognized as an outstanding freshman senator in his first year in office and was assistant minority leader when he left the Senate.

When he died in 1988 at age 54, Joyce and their four children knew the best memorial to their husband and father would be a scholarship to a student planning to study psychology. The family endowed the Senator Herman J. Fanning Scholarship in 1989, and Joyce and her lawyer administered it for 15 years. However, filing the proper tax documents, along with the financial concerns and finding someone to present the scholarship on awards day at South, became difficult for Joyce.

She changed attorneys, and the her new attorney, Don Nattkemper, suggested she consult with the Wabash Valley Community Foundation about taking over the scholarship, which is what the family decided to do in 2004.