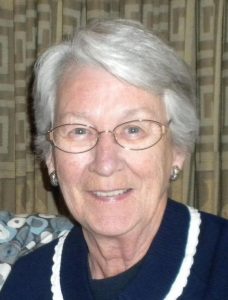 Sarah Jane “Sally” Organ Pierce Geitz was born on August 2, 1933 to John E. and Eunice E. Vine Organ. Sally grew up in a family where education was held in high esteem. Her grandparents had been teachers, as was her mother.

Both Sally and her brother, Jack, were valedictorians of their senior classes at Sullivan High School. It was tradition for Sullivan High valedictorians to receive The Mary Frances Brown Award, given by local jeweler, Jim Brown. Sally always remembered receiving her award upon her high school graduation. Sadly, the tradition ended when Mr. Brown died. Sally was determined, however, to make certain that the valedictorians were being honored in some way, so she set out to start a fund with the Sullivan County Community Foundation, an affiliate of the Wabash Valley Community Foundation.

“I believe in rewarding achievement; so my sister, Lynn Organ Amstutz, of Silverthorne, Colorado, and I set up the John and Eunice Organ Valedictorian Scholarship.” The scholarship is in memory of Sally’s parents.