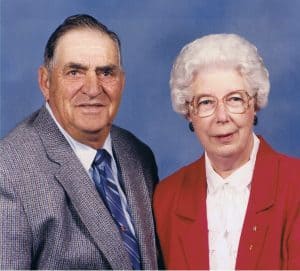 Margaret was born June 27, 1922 in Clay County. She was the daughter of Enis and Beulah (Vanhook) Campbell. Following high school, she attended nursing school and graduated from St. Anthony School of Nursing in 1943 as a Registered Nurse. Margaret worked as an RN until her retirement. She was a member of the Indiana State Nurses Association and a charter member of the Clay County RN Club.

Richard Shattuck served in WWII. After the war, he returned to marry Margaret in 1945. Richard worked for G.T.E. (Verizon) for 35 years. Having no children of their own, they loved and cared for their nieces and nephews and were always willing to help others. Richard passed away in December of 1994. Margaret passed away in February of 2006.

The Richard and Margaret Shattuck Scholarship Fund was established in 2006, following Margaret’s death, by Margaret’s sister and brother-in-law, Barbara and Robert Deakins. Barbara had said, “I hope this [the scholarship] will help in some way, as they were both loving and caring people, and I was proud to have had them as a sister and brother-in-law.” This scholarship is awarded to a current graduating member of a Clay County high school.