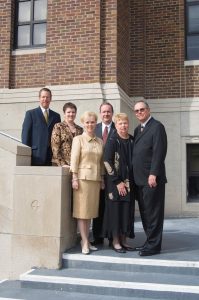 With Dale and Nancy McKee’s 50th wedding anniversary approaching in September 2006, their children Craig, Beth and Chris, and their daughter-in-law Diann, discussed what might be an appropriate gift to help celebrate their parents’ milestone. When they put the question to their parents, as they might have expected, the couple deferred any personal gift and suggested that a better choice would be to establish a scholarship fund to benefit the youth of Central Presbyterian Church.

Central Presbyterian has been the McKee’s church home for 41 of their 50 married years. The McKee children grew up in the church and remember with fondness many members of that congregation as friends and mentors. They observed times when the church used its resources to help college students in need of support, so they established a permanent scholarship that would not only honor Dale and Nancy, but would also benefit the church’s youth. They all agreed that the Wabash Valley Community Foundation was the appropriate vehicle to make that happen.

When the McKees retired from Indiana State University in 1998, Dale was Acting Vice President for University Advancement and Executive Vice President of the ISU Foundation. Nancy was the Acting Dean and a Professor of Nursing. The McKee children had watched their father’s involvement in fundraising at ISU for more than 30 years, so of course, the idea of giving was an important part of their upbringing.