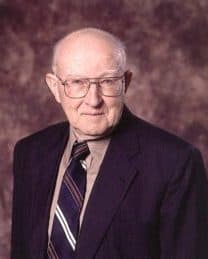 James F. Jackson grew up during the Great Depression of the 1930s. His family did not own a radio, so Jackson spent his time reading the daily newspaper, automobile magazines, Saturday Evening Post, Colliers, and Life. Jackson graduating with a degree in education from Indiana University. He often wondered how his life growing up would have been different if his parents had pursued higher education.

Over the years, Jackson worked for Rural Electric, was drafted in February of 1942 for the Army Air Corps, taught three years in Pleasantville and worked for GE at the aircraft jet engine factory in Evendale, Ohio. As his mother’s health declined, Jackson moved back home to take care of her and continued to do electrical work.

Since 2000, the James F. Jackson Scholarship has been awarded to graduating high school students from Knox, Greene, Sullivan, and Vigo Counties in Indiana and Crawford County in Illinois. Preference is given to students with an interest in chemistry, mathematics, physics, biology, and engineering. Through this scholarship, Jackson has helped students achieve higher education.

Although James F. Jackson passed away May 5, 2013, his legacy will continue to live on through his scholarship fund.