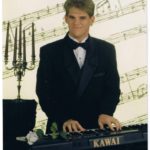 J.P. Alexander was born on April 2, 1981. From the age of two, J.P. showed a strong interest in music, especially in piano. He could also play saxophone, clarinet, and flute, but keyboarding instruments are what he loved the most. He could play synthesizers, organs, clavinovas, but his favorite instrument to play was the grand piano.

At the age of nine, J.P. played in his first wedding. He competed in a piano competition in Indianapolis called “The Hoosier Young Pianist” and won the honor to play concerts in the Fine Arts Building at the Indiana State Fair. Each year, he would compete again for this honor with repeated results, playing for 8 consecutive years. People would stand or sit around listening in amazement at the talent of J.P. at such a young age. Many times he received standing ovations and was asked to play encores.

By the time he was fifteen, J.P. had been contacted by a recording artist and studio in Tennessee. In January of 1997, J.P. released a religious album titled, “Grace That Is Greater.” This same year, J.P. was asked to play for Governor O’Bannon’s inauguration at the State Capital building in downtown Indianapolis. J.P. soon became a personal pianist for Gov. and Mrs. O’ Bannon, playing various times for their receptions held at the Governor’s mansion. Upon his death, a competition was held in Indianapolis and a “J.P. Alexander Showmanship Award” was presented by the Governor’s Office to the winning participant in J.P.’s honor.

During the few short years of his life, J.P. played at many recitals and numerous piano competitions. At the age of 16, he placed 9th in keyboarding at the National Fine Arts Festival held in Springfield, Ohio. J.P. was frequently hired to play at weddings, anniversary receptions, banquets, churches, youth groups, reunions, birthdays, dinner music at fine restaurants and funerals at nine area funeral homes. He was the opening act for numerous Gospel concerts at the Sherman Theater in Sullivan, including groups such as J.D. Sumner and the Stamps. J.P. was also the pianist for a few local gospel singing groups and traveled around to various churches doing concerts.

The J.P. Alexander Memorial Scholarship Fund was established in the Sullivan County Community Foundation, an affiliate of the Wabash Valley Community Foundation. The purpose of this fund is to provide scholarships for graduates of Sullivan County, Indiana. Consideration will be given to those who plan to pursue a career in music and special emphasis will be given to applicants excelling in piano. The J.P. Alexander Memorial Scholarship Fund will assist many students in the future years to come to fulfill their musical dreams and careers.  J.P.’s memory and legacy will live on forever.