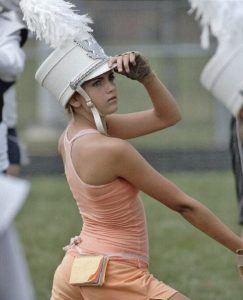 Just one day before a competition that everyone had practiced so hard for, Halie was in a tragic car accident. Halie died in the hospital that night from injuries. Her many friends, students, and teachers, gathered at the high school to mourn in disbelief until the wee hours of the morning.

“She was one of those kids who made it a joy to be a teacher,” said Bob Medworth, band director since 1977.

Bob and the high school staff had to decide if the practices and performances should be cancelled. However, the students all wanted to continue on for Halie and make her proud.

“It was so hard,” said Bob, “You’d hear kids crying during practice.”

The band made it to the regional competition; it had been just nine days after Halie’s death. It was pouring down rain, but before the band was about to go on, a rainbow arched over them and then a second rainbow appeared. The two rainbows remained bright for the band’s performance and then faded as the band left the field.

“When I saw it I just started crying,” said Makenzie Brown, a good friend of Halie. “I told a judge standing near me, ‘That’s my best friend.’ It made me feel like she was right there watching us.”

Many parents and fans in the stands took pictures of the rainbow, and after inspection of the photos they noticed something. The Northview Marching Knights performance included 11 medieval-looking towers that were painted weeks earlier to look like they were made from grey stones. The center tower clearly spelled out Halie’s last name “Hite.”

The band won the state finals that year. T-shirts were made for band members, their families and fans. A rainbow was in the center.

Halie’s parents, Tony and Pamela Hite, established the Halie’s Rainbow – the Halie Hite Memorial Scholarship Fund to reward students who not only participate at Northview High School in the band, color guard or as a cheerleader, but who are also involved in their community and who personify Halie’s philosophy: “Laugh your heart out, Dance in the rain, Cherish the moment, Ignore the pain, Live, Laugh, Love, Forget & Forgive, Life’s too short to be living with regret!”