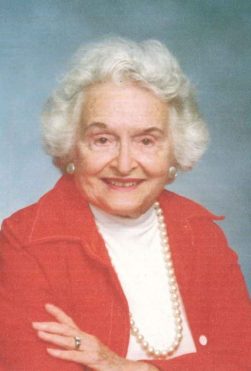 Esther Ladson was always proud of her secretarial and administrative training and experience. She graduated from Sullivan High School in 1929 and from Brown’s Business College in the Secretarial-Shorthand Course in 1930. After some time working in various offices in Sullivan, she went to Washington, D.C. to work for the federal government from 1941 until 1958.

In order to care for her ailing mother, Fannie, Esther left Washington and returned to Sullivan. She remained in Sullivan after her mother’s death, and married Terrence Ladson in 1959.

Esther’s father was Charles Ruddell, who owned the Ruddell Brothers Grocery Store in Sullivan. The building for the grocery store was purchased in 1909 and then sold by Mr. Ruddell in 1933. The building currently houses the Sullivan County Historical Society.

Esther Louise Ruddell Ladson passed away March 26, 2005, while recovering from surgery. This scholarship fund was set up in her memory with the purpose of providing scholarships for graduates of Sullivan High School who are attending a business college.