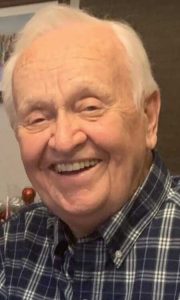 Jack Shanks was born in Stanford, Kentucky on June 24,1931, to Ted and Lula Shanks. He graduated from Ashboro School in 1949 and served in the Army from 1953-55 during the Korean conflict. Jack married Pat Buck in 1954.

After being discharged, he worked for IBM 33 years and then operated an auto body repair shop for ten years. In 1997, he and Pat moved to Fort Myers, Florida, and lived there for over two decades  before moving to Lutz to be near family.

Family was special and he always enjoyed their visits. Jack loved talking to people at church or as a greeter at Walmart. He served as an Elder and Deacon, as well as ushering and volunteering where needed. He liked watching TV and playing cards and, of course, winning.

If friends should so desire, memorial contributions may be made to the Jack Shanks Memorial Fund, c/o Wabash Valley Community Foundation, 200 South 8th Street, Terre Haute, IN 47807 or by clicking here.