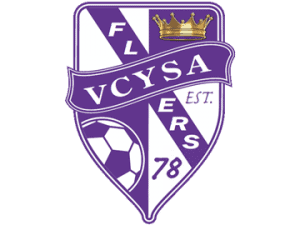 The VCYSA Soccer Club was started four decades ago in 1978 because a few kids in the community had gotten interested in soccer watching Soccer Made in Germany in 1977 and wanted an outlet to play. One of them included the son of an Indiana State University (ISU) professor and friends of Coach and VCYSA Director of Coaching, Mike Aycock. (One of them grew up to be a very successful goalkeeper at ISU).

The club was founded by coach Aycock with the help of some of his teammates and ISU English professor Fred Rusch. The club initially held soccer clinics in 1977, but didn’t start play until the spring of 1978, as coach Aycock recalls.  Coach Aycock was the first President of the organization and coached two teams, refereeing many of the games as well. The club started with six (6) or eight (8) teams total and played at the former Honey Creek Junior High School, out on the field where the track is today. Lee Phifer provided some income through concessions he ran from an RC Cola trailer he brought each week.

The play was all recreational and focused on the 12-14 age group. Older kids were added first, but eventually the younger ages were added; which was what caused the club to grow to a size that needed much more than one field.  The club grew into Travel soccer pretty fast, sometime around 1981, while coach Aycock was the men’s coach at ISU. The clubs first sponsor was the Terre Haute Lions Club, whose color is purple. So, prosaically enough, that’s how the Club started wearing purple uniforms.

Not long after that, because the Oberlandler Club was also a sponsor, the Club started hosting an Octoberfest Tournament that they held on the front grounds at the Vigo County Fairgrounds. After a year or two at Brittlebank Park, the Club eventually settled at the Fairgrounds, renting the space that they used for many years… until 2009 when the now Springhill Soccer Complex was completed and ready for play.

The Vigo County Youth Soccer Association Endowment Fund was created within the Wabash Valley Community Foundation to help the Club succeed in its mission “To develop and promote the growth and appreciation of the game of soccer and to provide the best possible soccer experience for all players.” To donate, please click “Give Online.”