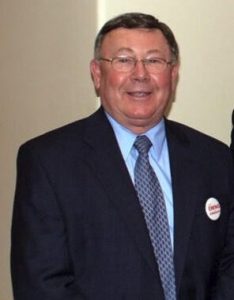 Tom Ewing was born on June 4, 1940, in Kansas, Illinois, to Wilbur B. Ewing and Virginia M. Hicks Ewing. He graduated from Honey Creek High School in 1958 and went on to earn his bachelor’s degree in education from Indiana State University in 1962. He married the love of his life, Carol Gummere Ewing, on August 26 of the same year.

He began his teaching career at Lebanon Jr. High in Lebanon, Indiana. After several years, he moved back to Terre Haute and taught at Glenn Jr. and Sr. High, Woodrow Wilson Jr. High and then his home for 30 years, Lost Creek Elementary, where he taught 5th grade. He was an amazing teacher. In fact, up until his passing, his former students would reach out to him and let him know the positive impact he had on their lives.

During his teaching career, he taught adult education at night and worked for Rick Jenkins Construction in the summer. In 1974, he became a founding member and volunteer firefighter for Honey Creek Fire Department. For 30 years, he volunteered his time as a Reserve Deputy Sheriff with the Vigo County Sheriff’s Department. This was a passion that brought him immense joy. He was the true community police officer.

His family and friends brought him the most joy in his life. Aside from his loving wife of 58 years and beloved children, Greg Ewing and Lori Fox, his absolute pride and joy were his grandchildren. He was the best grandpa there ever was, never missing a minute of his grandchildren’s activities and always serving as their biggest fan.

If friends should so desire, memorial contributions may be made to the Tom Ewing Memorial Scholarship Fund, c/o Wabash Valley Community Foundation, 200 South 8th Street, Terre Haute, IN 47807 or by clicking Give Online.