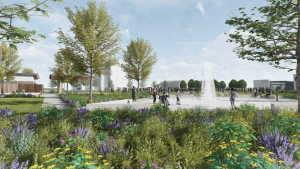 In 1980, the City of Sullivan’s newspaper posted an article about Sullivan’s future and the potentials this new horizon held. These visions were set with the notion that Sullivan should be and would be a destination for all. Façade improvements, streetscapes, wayfinding, and building and housing infill were listed as high-reaching goals for Sullivan’s future. Thirty years later, many of the dreams deemed unreachable and unrealistic at the time, have been met with outcomes exceeding expectations.

One of these once far-reachable dreams is Sullivan’s Central Plaza. Located where Sullivan Central Elementary School once stood for nearly a century, Central Plaza represents much more than the namesake of a former school ground. Today, it represents the home of the Sullivan Civic Center, a meeting space, wedding venue, and rental hall. Stretching in the yard beyond the Civic Center lies a vast green space. Like most places, in the City of Sullivan, outdoor recreation is a favorite pastime. Once the school bell rings to wrap up the day, kids frolic to the plaza to play ball while adults read on a bench or walk/run on one of the lining trails that connect to downtown. The same dreams that led Sullivan Central Plaza to where it is today are the same dreams leading it to tomorrow.

Central Plaza will soon house the Central Plaza Pavilion, a structure built to provide outdoor entertainment, outdoor community events, and potentially draw-in acts on a national level. An aquatic feature will also be an integral aspect of Central Plaza. Unlike other water attractions, an aquatic feature is designed for everyone. Children of all ages are welcome to participate; adults are persuaded to make a run through the fountain resulting in the belting giggles from kids, and elders can comfortably and conveniently witness and/or participate in games with their grandkids. The uniqueness of an aquatic feature is its ability to be a playground, an observatory, and a timeless attraction. Lastly, Sullivan’s ever-growing Sully Trail System hugs the outskirts of Central Plaza, encouraging exercise and health and wellness, while also connecting the various businesses, parks, and downtown features worth sharing.