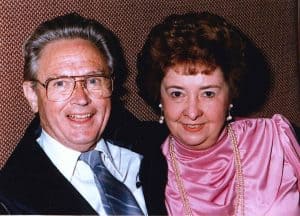 It all began in 1941; Lorene was working for the Sullivan County Clerk’s Office and Malcolm was in the United States Army during World War II. After Malcolm’s discharge, he farmed during the day and taught a head-start farm course for veterans. As the course ended, Malcolm accepted a position with the U.S. Department of Agriculture, Soil and Water Conservation Service. It wasn’t until 1945 that the couple would marry.

In 1954, the couple purchased Lorene’s, a small clothing boutique in downtown Sullivan. While working full-time for the Sullivan State Bank, Lorene managed and worked at Lorene’s on her days off from the bank.

After Malcolm’s passing, Lorene created the Lorene B. and Malcolm Pigg Beautification Fund. When she came up with the beautification aspect, Lorene didn’t have anything specific in mind, although she enjoyed the flowerbeds at the downtown intersections, where she and Malcolm both worked. When deciding to create an endowment at the Sullivan County Community Foundation, an affiliate of the Wabash Valley Community Foundation, she hoped their wishes would be fulfilled by someone creative that would think of something that could enrich downtown Sullivan.