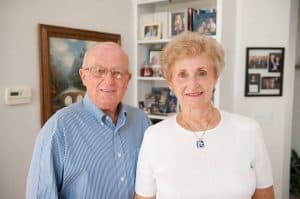 Janice Hart grew up in Center Point and attended Ashboro High School. She dreamed of being a nurse since she was four years old, when she would visit her ill mother at the hospital. She enrolled in Union Hospital’s nursing program after high school, which consisted of taking classes at Indiana State University.

Mauri was an outstanding athlete while attending Indiana State University. He graduated in 1958 and began teaching at Meridian Elementary. He was soon sent to active duty in the Air Force but returned a year later to continue teaching fifth and sixth grade.

Janice and Mauri knew of each other and decided to act on their feelings in 1960. They were married on Christmas Eve that same year and became the ultimate power duo — taking on the community one philanthropic act at a time! They were both avid supporters of Indiana State University and often showcased that on their golf cart as they drove around their community.

The Mauri and Janice Modesitt Dictionary Fund was established to provide dictionaries to the third grade students at Meridian Street Elementary School, which is part of the Clay County Community School Corporation.

The Janice Hart Modesitt, R.N. Nursing Scholarship Fund was established to provide scholarships for graduates of a Clay County, Indiana high school who will be attending Indiana State University and who intends on seeking a four-year nursing degree.