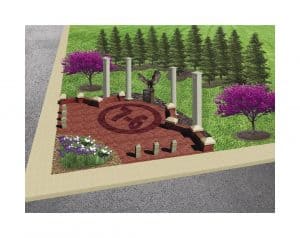 Recently, dozens of Garfield High School alumni met near the site of former Garfield High School to launch a campaign for a new memorial to the school. Graduates representing classes between 1945 and 1971 — the school’s final year — turned out for the event, along with some alumni who attended one or two years prior to continuing their education at Terre Haute North Vigo.

Terry Dischinger, a 1958 graduate of Garfield High School, serves as honorary chairman for the Purple Eagles Plaza campaign. Dischinger was a multi-sport standout for the Purple Eagles and went on after graduation to play basketball at Purdue. A member of the gold medal 1960 U.S. Olympic team, he played nine seasons in the NBA, primarily with the Detroit Pistons and finishing with the Portland Trailblazers, in a career that was interrupted only by two years of military service.

“Terry is such an accomplished person,” said Susan Mardis, campaign chair for the project. “He represents students at our high school in many ways: business, military, athletics and scholarship.”

Mardis noted the plans for the new “Purple Eagle Plaza” come amid a revitalization effort in the school’s 12 Points neighborhood. The design, created by Garfield alumnus Pat Chaney, recognizes a 7-6 football victory over Wiley on Thanksgiving Day 1915 that came to be remembered as “the spirit of 7 to 6.” It also features four pillars — two round and two square — similar to those at the entrance to the former high school building.

The new memorial will replace the current one dedicated in 1983 thanks to the family of Dr. Paul Humphrey, a 1935 Garfield graduate who played football and basketball for the Purple Eagles and went on to play football at Purdue and for the Milwaukee Chiefs in the American Football League.

To donate, please click on the “Give Online” button.