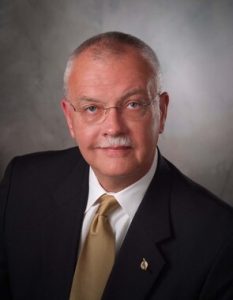 Dr. Charles (Chuck) R. French was born July 1, 1950, to Don and Katherine (McAllister) French. He graduated from Brazil High School, Class of 1968. He graduated from Indiana State University in 1972 and then attended the Indiana University School of Medicine. On July 1, 1976, Chuck began with the first Family Practice Residency group at Union Hospital.

Following completion of the Residency Program, on July 2, 1979, he, Dr. Richard Mayrose, Dr. Steven McDonald, and Dr. Robert Meissel began what was known as Northside Family Medicine. Chuck enjoyed the art of family medicine. As the years passed, he often would say that he took care of friends and that office calls were often time to visit as well as provide medical care. In 2001, Chuck moved his practice to Brazil when Dr. Conrad wanted to retire. That office was known as Clay Community Rural Health Clinic. He retired from St. Vincent Medical Group in 2017. He came full circle and in 2018 he enjoyed a position back at the Family Practice Residency Program staffing patients with the current residents.

On May 11, 1984, Chuck and Susie were married in Honolulu, Hawaii. Their life together over 37 years was filled with peaks and valleys as they blended their sons and two daughters. They also took a leap of faith and fulfilled a goal of starting French Funeral Home in May of 1995. Together they restored the building at 421 E. National, formerly known as Miller and Sons Funeral Home. Chuck and Susie were partners in business and in their marriage. They both cherished their time together in the evening catching up on the day’s events and with each other.

Over the years Chuck has been involved in many organizations and served on several boards, including the American Red Cross and Community Foundation. He and Susie are members of the First Presbyterian Church, where he served as a Trustee. He is a member of the Free and Accepted Masons, Lodge #541, Scottish Rite, Valley of Terre Haute, Zorah Shrine and Jesters Court #13. In years past, he provided medical screenings in Terre Haute for the Shriners Hospital. He is also a member of the Brazil Elks Lodge.

In the 1980’s he was a collector and restored many 2-cylinder antique John Deere Tractors. If you knew Chuck French, you knew he loved cars. He also loved the pursuit of a business deal, the funeral profession, a restored antique car, and his family.

On April 30, 2008, Chuck experienced a thoracic aortic dissection. The result left him paraplegic. Suddenly life was changed, and he faced the world from a different view. He became more patient, and his priorities changed a bit. The family became experts on the accessibility and challenges of wheelchair life. Cars were still a love, and they were adapted with hand controls. He currently has been restoring a 1940 LaSalle Hearse. And yes, he did as much of the restoration as he possibly could, even from his wheelchair.

He was proud of the funeral profession, so much so, he enrolled in the Carl Sandburg College of Mortuary Science and holds a license in Indiana and Illinois. He served as a District Director for the Indiana Funeral Directors Association and then later became the President of IFDA in 2007-2008. He currently served IFDA as the Chairman of the Ethics Committee. Chuck was always an advocate for further education and was a proud member of CFSP, Certified Funeral Service Practitioner, which requires more education hours than standard licensing. He also was an Isaac Ball Fellow, which supports funeral service education.

Chuck was a man who always took pride in caring for his home, his business, his cars, patients, and of course his family. He passed away on August 6, 2021.

If friends should so desire, memorial contributions may be made to the Dr. Charles and Susie French Family Fund, c/o Clay County Community Foundation, 200 South 8th Street, Terre Haute, IN 47807 or by clicking here.